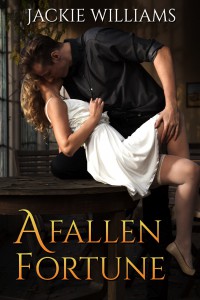 All the books on this page are deliciously flavoured by France.

Brittany is one of my favourite places and I couldn't resist including it in several of my books. The wild coastlines and fabulous château are endlessly exciting and inspiring.

Fleeing the humiliation and pain of a cancelled society wedding, Elspeth resolves to leave everything behind while she restores an ancient but beautiful mill in the depths of rural France. The last thing she needs is an arrogant but incredibly handsome neighbour upsetting her days.

Desperate to escape from the endless worry of an arranged marriage and hoping for nothing more than a friendly chat to someone who doesn’t fawn over his title and money, Leo goes to welcome a new neighbour.

The perfect view of Elspeth’s deliciously shapely rear as she taps tiles into place on the ancient mill roof is the last thing he expects to see.

A short romance to idle the few weeks before his impending doom is one thing, but falling madly and hopelessly in love hadn’t been on his agenda. Having it whack him right between the eyes is an unexpected bolt from the blue. His life will never be the same again.

Can Leo save his sanity, his inheritance and his fabulous château in France while keeping his identity secret from the lovely woman he wants? And after discovering his deceit, can Elspeth live without the love of the charming French gardener who has stolen far more than her heart and soul?

This book is suitable for New Adult upwards due to adult content.

To buy A Fallen Fortune on amazon,  Click here  or on image.

The beautiful beaches of Brittany and Normandy were a focus of frantic activity throughout the Second World War. Thousands of men landed on them, died on them, and were rescued from them. For some men their escape was delayed, a terrifying time where every villager’s moves came under watchful German eyes. A few of the men had to wait a little longer for a boat to take them home…A few of them are still waiting.  Being asked to accompany her best friend on her first holiday in years is exactly what Joanna needs. Having her best friend’s incredibly handsome brother unexpectedly join them in the idyllic holiday cottage is not.  Tall, athletic and fabulously successful, sports writer and celebrity interviewer, Dominic Winter is every woman’s dream man. Unfortunately to Joanna, her best friend’s brother is also arrogant, antagonistic and spectacularly argumentative, but much to her annoyance, he has been the highlight of her dreams ever since they were all together at school six years previously.  The tiny fishing village of Prajou holds many secrets of the past but while suspicion and whispers echo their way through the passages of time, can Joanna and Dominic call a truce in their never-ending battle of wills?  It’s time to stop just smelling the aroma of freshly baked French bread and discover the delicious scent of romance in the air.  Echo Beach is an easy read romance suitable for young adult and above. (Contains mild bad language and some sensual passion)

To buy Echo Beach on amazon, please click here or on image.

Now available on amazon and other retailers including Apple, Kobo, and Nook

Haunted by the elusive visions of treasures, Princes and gentle kisses since the fateful day when she was orphaned, eighteen year old Sophie is shocked to discover that she now owns the property where all her dreams began.  With the exciting prospect of a new life in a beautiful French town, she packs her bags and moves to her cottage. Sophie's first tentative steps almost falter as sad memories crowd her thoughts but a handsome Frenchman, whose dark eyes and delicious voice touch the deepest recesses of Sophie's heart, strengthens her resolve.  From his studio in town, Xavier cannot take his eyes from the young woman's slender beauty. He's waited years for her to come back to him and he cannot miss this chance to clear his conscience, but is he strong enough to confess his guilt and beg her forgiveness for the tragedy that killed both her parents, or will Sophie condemn him as harshly as he has condemned himself over the past five years?  With the family solicitor attempting to seduce her out of far more than just her inheritance, while at the same time destroying Xavier's hard won reputation, Sophie finds herself at the centre of a cruelly twisted conspiracy with only the slimmest chance of rescue or escape.  Can Xavier pull himself from the depths of despair and self destruction in time to save the woman he loves or will the haunted dreams and innocent actions of a thirteen year old girl become an insurmountable barrier for him to overcome?

This book contains some sensual scenes and adult content.

To buy Treasured Dreams on amazon please click here or on image.

Other books by Jackie Williams

Untamed Regency - Flowers of the Aristocracy

A Hole in One (The Front Nine)